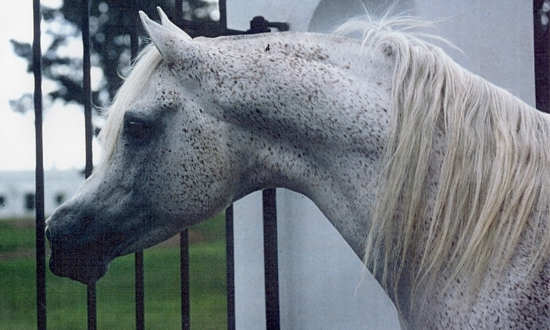 El Shaklan has become a household name in the world of the Arabian horse. His influence spans the globe. His name is found in pedigrees of horses in every country that Arabians are bred in the world and in show winners at every show in the world. He has not only influenced horses through his genotype it is through his phenotype that we can see El Shaklan, 35 years after his birth, in horses everywhere. He created a distinct look that is unmistakably “El Shaklan.” He and his dam Estopa are the cornerstone of the Om El Arab breeding program and many successful breeding programs around the world..

El Shaklan was bred by Om El Arab and was born in 1975 on the original farm in Germany. He spent two breeding season’s in England at Pat and Joannna Maxwell’s farm where he won several championships including British National Junior Champion Stallion. He returned to Germany in 1978 where he also won the Junior National Champion title. He was shown at the European Championship in Paris and was crowned European Champion. In 1982 El Shaklan traveled to the United States. He was shown at the US Nationals twice, tying for first place in 1983. He was US Top Ten in 1983 and 1985. El Shaklan was sold to Brazil in 1985, against Sigi’s wishes. He was Brazilian National Champion Stallion. In 1990 he was again sold to Count Federico Zichi-Thyssen of Argentina. This is where El Shaklan spent the final years of his incredible life, being royally treated like the king he was.